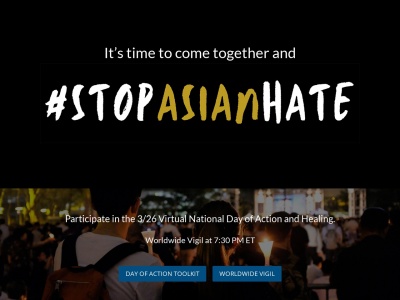 Friday, March 26, 2021 is Virtual National Day of Action and Healing

On March 26, 1790, the Naturalization Act was signed into law, prohibiting non-white people from becoming citizens of the United States. Over 200 years later, Asians in the U.S. are still suffering from the effects of the racism our country was founded upon. Asian elders are being physically assaulted in the streets. Asian American children are afraid to go back to school. We are still grieving the murders of 6 Asian women in a racially-motivated killing spree in Atlanta last week. That’s why, on March 26, we’re inviting you to join us for a social media campaign to #StopAsianHate. Ending this horrific spike in anti-Asian violence starts with people like you speaking up about this growing problem. Start by posting your message of support for Asian American communities using the hashtag #StopAsianHate on Friday, March 26. If we all join together and raise our voices against anti-Asian racism, we can keep our communities safe.