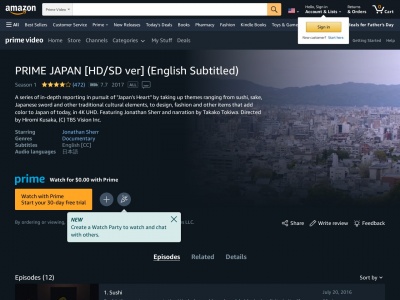 “Prime Japan” is a TV series by Jonathan Sherr who introduces different themes ranging from sushi, sake, Japanese sword and other traditional cultural elements, to design, fashion and other items of Japanese culture.

This show focuses on artistic visual presentation of the Japanese culture, which by itself an epitome of Japanese culture that values aesthetics the most among everything else. Most of the show is in Japanese with English subtitle. The show is part of the Amazon’s prime video (subscription is required).

Here is the list of topics that this show covers: